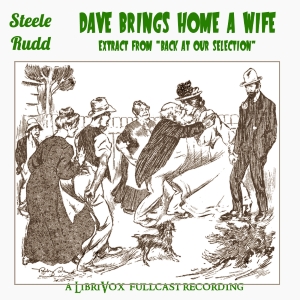 LibriVox recording of Dave Brings Home A Wife by Steele Rudd.
Read in English by Beth Thomas; Son of the Exiles; Tomas Peter; Devorah Allen; Nemo; Linda Olsen Fitak; Larry Wilson; Zoe Trang; TJ Burns; Foon; Peter Musgrove; ToddHW; Sonia; Sandra Schmit; Leanne Yau
This is a self-contained story-arc over eight chapters from the pages of Steele Rudd's book "Back At Our Selection". The Synopsis: After being a shy bachelor for a number of years, Dave (Dad Rudd's second eldest son) has finally got married. To a "Girl from Town" named "Lily White". When she first arrives at "Ruddville", she and Dave's sister Sarah get on wonderfully. But after some months, friction between the two young woman sets in, and Dave and Lily seek to have a separate house of their own on the extensive Rudd property. But Dad, though now a prosperous farmer, started out with his wife and children in a two-room settler's slab-hut, and has a notion ... exacerbated by tightfistedness ... that all young folk should start out their married life like that and work their way up. So he finds, demolishes, carts, and re-erects a forty-year-old abandoned shack for his son and daughter-in-law. They acquiesce to accepting it, and in time even become rather contented there. But soon, Dave's mother-in-law arrives for a visit, and cranky old Dad Rudd finally meets his nemesis. - Summary by Son of the Exiles


This project was finished during the March Challenge with the precious help of the following six volunteer editors (thank you all) :
Bhavya
Campbell Schelp
Chuck Williamson
JayS
linny
Maria Kasper

Uploaded by librivoxbooks on March 9, 2019